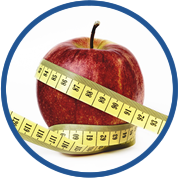 According to the Diagnostic and Statistical Manual of Mental Disorders-V (DSM-V), Eating Disorders are characterized by severe disturbances in eating behavior.

Three of the commonly known types of Eating Disorders are:

The essential features of Anorexia Nervosa are the refusal to maintain a minimally normal body weight, an intense fear of gaining weight, and exhibiting a significant disturbance in the perception of one's body shape or size.

There are two subtypes of Anorexia Nervosa:

The essential feature of this disorder is binging as described in Bulimia Nervosa, without the purging behaviors. An individual with this disorder will binge eat at least once per week for 3 months and have marked distress about the binge eating.