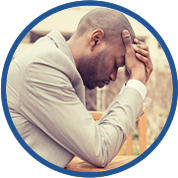 Brief, mild to moderate anxiety as a response to certain life situations is normal. Minor everyday occurrences can trigger feelings of anxiety, e.g., running late for an appointment, interviewing for a job, or buying a house, but such feelings are typically directly related to an event and relieved shortly after the event is over. Anxiety that persists with only vague or no apparent cause or that is so intense that it interferes with normal activities is not normal and can be a sign of an anxiety disorder.

Generalized anxiety disorder (GAD) is, as its name implies, characterized by feelings of anxiety that generalize to multiple situations and settings that may have little to nothing in common except an unfocused anxiety. People with GAD typically can't stop worrying even though they may recognize that their worries are unrealistic or out of proportion for the situation.

Panic Disorder is diagnosed when a person has recurrent, unexpected panic attacks. As a result of these attacks, the person will worry about additional attacks, and will change their behaviors to avoid having another attack. Panic disorder symptoms can include physical symptoms that enhance the individual's fear that there may be a medical problem such as: chest pain, hyperventilation, shaking, sweating or an upset stomach.

Social Anxiety Disorder is an extreme fear that everyday social situations will result in being judged leading to embarrassment, shame or humiliation. The fear of social rejection will prevent the person from seeking friendships and participating in otherwise fun activities.